1. Can you tell us a little about your book?

I’d be happy to! FEAR THE DROWNING DEEP tells the story of sixteen-year-old Bridey Corkill, who’s living on the Isle of Man in 1913. She’s hated the ocean ever since she was a little girl, when she saw her grandfather leap from the cliffs and drown with a smile on his face. As the story begins, Bridey sees a body washed up on the shores of Port Coire, her small town, and it isn’t long before her friends and neighbors start disappearing one by one. It’s up to Bridey to convince everyone of the danger in the water before she loses the people she loves most…

And here are a few things this story contains that I love: a handsome boy with a mysterious past, kissing, an old woman who might be a witch, lots of Manx culture and mythology, sea monsters, sisters, and kissing. Did I mention the kissing already? ;) Oh good. Just so you know, this book has plenty of brooding sea atmosphere and danger, but it’s most definitely a kissing book, too!

2. Is it a part of a series or a standalone book?

FEAR is a standalone book; however, I’m hoping for/planning a companion novel in the future, which would feature one of Bridey’s sisters as the main character, and would focus on a different aspect of the Isle of Man’s fascinating mythology.

3. Are you a plotter or do you just write whatever is in your head?

Before I dive into actually drafting a story, I have to have a solid concept, have written a pitch and mini-synopsis, and know how the book will end. I don’t follow a very rigid outline (that takes the fun out of getting to know my characters, I think) but I’ll still say I’m a plotter because I do need to have a lot figured out before I write!

4. When writing do you need silence or do you prefer to have background noise like music?

I need silence, definitely. But I like to listen to music before I write—to establish a certain mood for a scene! If I listen to music while I’m writing, I get too distracted and just want to dance or sing along! With FEAR in particular, I listened to a lot of Méav Ní Mhaolchatha’s album Silver Sea, which is partly in Gaelic, partly in English, and a little French in the mix, too; it helped establish a perfect mood for windswept, mysterious island town where my characters live.

5. Is there a person(s) that inspired your main character?

Nope! Bridey is purely a product of my imagination, but I love her to pieces. However, her fear of the ocean was partly inspired by my friend Erin, who hates swimming and is afraid of drowning—traits that seemed so fitting in my story.

6. Are you working on your next book? 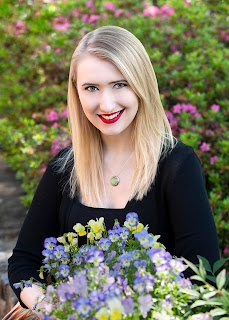 Most definitely! I’m happiest when I’m writing some sort of fantasy. I won’t say too much, but here are a few things that feature in my recent YA epic fantasy: sisters, witches, mythical beasts, Japanese mythology, and diversity.

Her YA historical fantasy debut, FEAR THE DROWNING DEEP, will be released by Sky Pony in September 2016.

She is represented by Christa Heschke of McIntosh & Otis Literary Agency. Sarah lives in Richmond, VA with her husband and four rescued greyhounds, and when she’s not writing, she can often be found painting or antiquing.